Upon entrance to the theatre, each ticket holder will receive a CD copy of the unreleased Loreena McKennitt Live at The Royal Albert Hall.

Multi-award-winning Canadian singer-songwriter and musician Loreena McKennitt has added a fall tour in Ontario and Quebec to her 2019 Lost Souls Tour schedule, simultaneously releasing Loreena McKennitt Live at The Royal Albert Hall, which was recorded during her celebrated March 13th performance at the prestigious British venue.

The Canadian tour will feature six concerts beginning in late October: three in Ontario and three in Quebec, where she has not performed in several years. Exceptionally, all concert- goers will receive a copy of Loreena’s new live recording upon arrival at the venue.

Loreena will be accompanied by fellow musicians Brian Hughes on guitars, oud and Celtic bouzouki, Caroline Lavelle on cello, Hugh Marsh on violin, Dudley Philips on double bass and Robert Brian on drums.

“We are so excited to be bringing the tour back to Canada and hope to announce more dates as soon as possible,” says McKennitt. 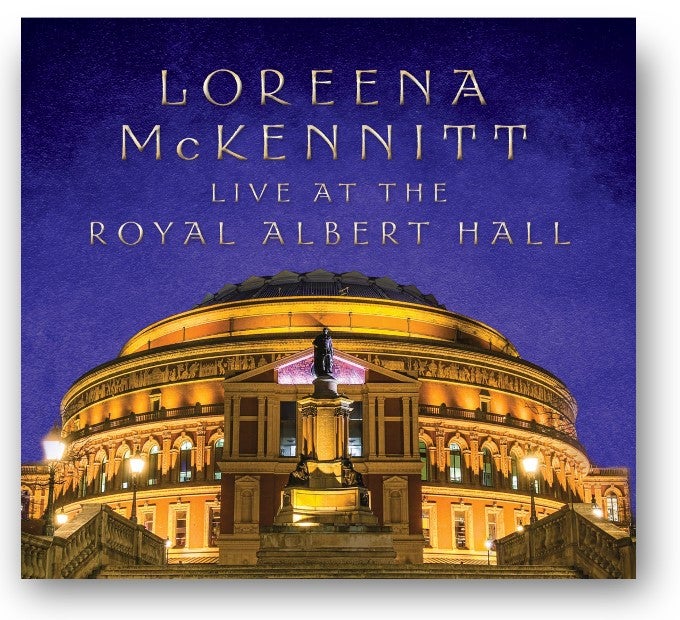 Loreena McKennitt Live at The Royal Albert Hall is a two-disc release featuring all 20 songs performed that evening, including seven that have never been released as live tracks, six of which are from her latest album, Lost Souls. A worldwide release will follow, with details to be announced in the fall of 2019.

The performance at London’s Royal Albert Hall was part of McKennitt’s spring tour. She’d performed there 26 years earlier, opening for British musician-composer Mike Oldfield, but this time she was the main act, and to celebrate the occasion she brought in five special guest musicians to join her.

“The audience was ecstatic,” wrote Liz Thomson for The Arts Desk, a British arts journalism website. Reviewing the concert, she described McKennitt’s music as “Celtic yet also Arabic, the modalities and metrics of each music perhaps more similar than is at first apparent…World Music indeed – but music which shows that the world is indeed small and that there is, as always, more that links us than sets us apart.”

Joining her for the Albert Hall performance was renowned Egyptian percussionist Hossam Ramzy, Daniel Casares of Spain, one of the top flamenco guitarists in the world, and Spanish nyckelharpa musician Ana Alcaide. Canadians Ben Grossman performed on hurdy-gurdy, bodhran, accordion and percussion, and Ian Harper on Uilleann pipes, bombard, the Turkish clarinet, flutes and whistles.

“The band are not your standard rock’n’roll format,” wrote reviewer David West from progmagazine.com. “The sound is warm and immersive, but always leaves room for the show’s star: McKennitt’s lofty soprano voice. It’s an instrument in its own right and wielded with such elegance that her lyrics, crafted with great care and meticulous research, become outshone by the sheer beauty of her performance.”

And in her own words, “It was a fabulous night,” says McKennitt. “It was exhilarating to have these five special guests along with the rest of our very accomplished band, to perform together in such a prestigious, historic venue as The Royal Albert Hall.” The Lost Souls Tour kicked off in the artist’s home base of Stratford, Ontario in September 2018, followed by performances in Brazil, Argentina and Chile. This spring, she embarked on a 25-concert, 10-country European spring tour, to be followed by a 24-concert, six-country summer European tour, which when combined will have seen her perform for more than 100,000 people. These tours will be followed by her Canadian tour this fall.

The critically-acclaimed Lost Souls album, released in May 2018, is McKennitt’s first recording of original songs since 2006. Produced by the artist herself, it is a tapestry of songs drawn from a wide range of influences, including the Celtic and Middle Eastern ones she has long been identified with.

Loreena McKennitt’s eclectic Celtic blend of pop, folk and world music has sold over 14 million albums worldwide. Her recordings have achieved Gold, Platinum and multi-Platinum status in 15 countries on four continents. She has twice been nominated for a Grammy Award and has won two Juno Awards, as well as a Billboard International Achievement Award.